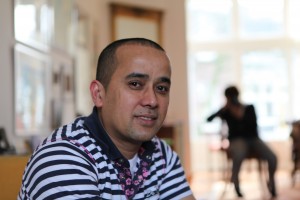 On the 24th of June 2011 a one-day photo exhibition of the project Crossing the Lines was held at Wereldhuis, Amsterdam. The conference ‘’Illegal help’’  hosted seven pictures of the pilot project. This project by Jonge Sla is supported by several Dutch organizations, such as the Workers Union and United Migrant Domestic Workers.One of the Dutch characteristics is cleanliness. Nowadays in the big cities this is mainly provided by either illegal or undocumented migrant workers. Their work isn’t taken into account in the government statistics, even though it contributes to the economic growth. The project Crossing the Lines aims to show the people behind those ‘invisible hands’, as well as their employers.Where Attic Van Limmikhof, Nieuwe Keizersgracht 1A, AmsterdamWhen Friday 24th of June 2011,12-5 pmContact Nies Medema, +31 (0)6 51 98 62 44, jongesla@xs4all.nl