Elena loves cooking. She feeds the old lady East European delicacies. Elena has been hired by the lady’s daughter to take care of her. Elena and her good friend Maria work in shifts. The old lady can hardly move and Elena and Maria lift her from her bed into a chair, from the chair onto a plastic chair to take a shower, into a wheelchair to take a walk. They both live in a small apartment in a small village on the outskirts of Amsterdam. 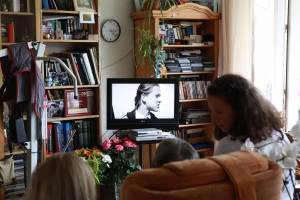 The house is quiet but for the TV set which shows Russian movies from the old lady’s collection. Sometimes they sing or cry together, watching.Elena was born in what used to be the USSR, the old lady was born there too. They speak Russian to her. The old lady tries to speak, but the sounds she makes are not discernible as words, let alone sentences. It’s not clear what she understands. Her ex-husband, who visits every day, is worried. ‘You shouldn’t let her watch detective series on the telly. We can’t tell if she wants to watch those. All that blood,’ he says. Elena and Maria are friendly, caring people. When I ask Elena to speak about her job, the joys and the sorrows, she says it’s a heavy job. ‘But I don’t think it’s kind if we speak about the lady in her presence. Let’s go outside and smoke a cigarette on the balcony.’We smoke and Elena continues: ‘This work is hard, you need physical strength to lift up a person who cannot move by herself. And it’s emotionally hard because I see how her body and mind deteriorate. She wants to speak but can’t. She wants to eat, but has difficulty swallowing the food by herself. She chokes more and more often.’ She sighs. 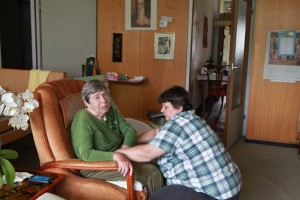 Elena’s day starts at 7 am, making breakfast and it ends at 9 pm when the old lady goes to sleep, at 2 am she checks if the old lady is comfortably sleeping. She has breaks, takes turns with Maria and her employers offer her free time, but she doesn’t feel the need or trust herself to take a bus to go on a trip to Amsterdam. She is here to make money, not to spend it. Is this the job she always dreamed of? No, but she takes life as it comes. She once owned two bars, worked as a saleswoman. ‘But we face crisis after crisis in our economy.’ If there would have been a job closer to her home that would be paid as well she would have taken that. She dislikes being a 24 hour bus ride away from home. Yet she doesn’t want to depend on her 28 year old son and his pregnant wife. She will be taking a four months leave, because her first grandchild will be born just before Christmas. Elena will spend some time with the three of them and return in spring. 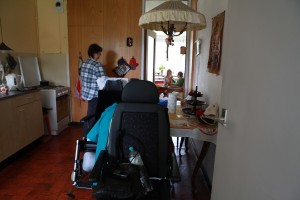 Elena dreamed of being a hairdresser when she was young. ‘My father and mother were in trade, so were my brother and sister and they expected me to go to the same school. So I did, but if you don’t mind me saying so, I might as well wipe my ass with this diploma. I wanted to be a hairdresser, but my mother told me ‘You’re not going to comb lice out of gypsy’s hair!’ You know, there wasn’t much soap and fancy shampoo sold in shops in the days of the Soviet Union.’ She tenderly strokes the hair of the old lady. She is her hairdresser now.Young Elena married a Czech man and moved to Czechoslovakia long before the Berlin wall came down. Now Czech Republic is part of the European Union and she is allowed to work in Western Europe. ‘I have always looked for possibilities. And since there is not enough work in our country, I started working in Austria, Germany and the Netherlands. I have taken care of my mother until she died at 80, I know how to take care of old people.’ And -Elena smiles- they are a lot less risky to take care of than children, who can fall off anything as soon as you don’t pay attention to them.’